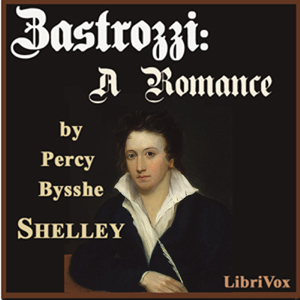 "Would Julia of Strobazzo’s heart was reeking on my dagger!"

From the asthmatic urgency of its opening abduction scene to the Satanic defiance of the villain’s departure "with a wild convulsive laugh of exulting revenge", this first of Shelley’s Gothic novelettes recycles much sensational boyhood reading and also points to some of his more mature concerns.

It is the ego-driven pursuit of passionate extremes, revenge included, which consigns figures like Zastrozzi and the murderous Matilda to an isolation which is socially destructive as well as self-annihilating. The story of their downfall is related in a relentlessly hysterical style – possibly more easily enjoyed when read aloud! (Summary by Martin Geeson)

Reviewer: Sam1989 - favoritefavoritefavoritefavorite - November 2, 2009
Subject: Fantastic read!
Zastrozzi expresses Shelley's views on Romanticism and the Gothic, taking it to a new level! Gripping and unlike many of the late 18th century novels has a set of characters that actually do thing. It's not all about sensibility and all that crap!

Reviewer: mikezane - favoritefavorite - October 30, 2009
Subject: Couldn't finish the book...
And I am absolutely fanatical about finishing books, but this one was terrible. The main character is a big dumb jerk who seeks to hurt his half brother and torture him to the point of suicide. The half brother is a weenie. I just could not stand either of them, and if both the characters are unlikeable, you have to put the book down and call it a day.

The reader is good, however, and I liked the classy voice and accent. I just couldn't get into the storyline.

Uploaded by librivoxbooks on October 5, 2009